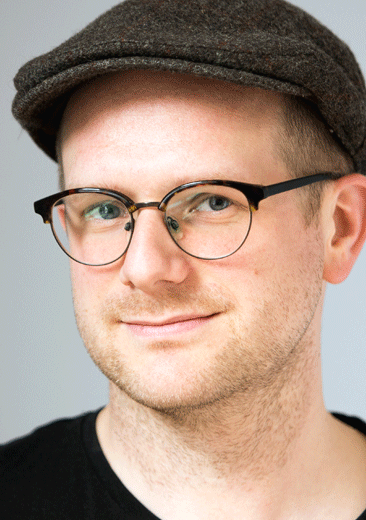 Adam's short film The Split, directed by Ed Rigg (Confection, Passenger) and starring Edward Hogg (Taboo, Indian Summers, Jonathan Strange & Mr Norrell), premiered at the Manchester Film Festival 2015. It was selected for the Cambridge Film Festival, Berlin’s ‘British Shorts’ festival and the London Short Film Festival. On the strength of its festival selections, The Split was submitted to BAFTA for consideration.

In Autumn 2014, Adam's play Conscientious toured nationally, visiting theatres such as Hull Truck, the Oxford Playhouse and Bradford’s Theatre in the Mill. The production, directed by Alex Chisholm, was originally developed at the West Yorkshire Playhouse as part of its Summer Sublets Residency. The play was revived for a couple of special performances in 2016 in collaboration with The University of Leeds.

Adam Z. Robinson is a writer and theatre maker. His most recent production, Shivers, toured to over 30 venues nationally. This December, along with his theatre company The Book of Darkness & Light, he will tour his brand new adaptation of A Christmas Carol by Charles Dickens.

His play, The Book of Darkness and Light, has toured to over 50 theatres and other venues since 2016.

In 2013, Go On, My Son a comedy short which Adam co-wrote and co-directed (with Nick Coupe) was supported by the Roundhouse, London, and funded by the Ex Animo Foundation. Go On, My Son was viewed more than 20,000 times in its first week of release online.

Adam is currently working on two new theatre projects: a new storytelling show called This Storm is What We Call Progress, directed by Fringe First award winner Dick Bonham and a brand new piece of theatre called Smile Club, which he is co-writing with author Andrea Heaton. Both of these projects have been supported by Arts Council England.

Adam is an experienced workshop leader and has worked with First Story, Arvon and Opera North as well as numerous schools and arts organisations across the country.